With the pandemic still going on around the world, more and more people are forced to stay at home and keep themselves busy whether it’s work from home, online learning, and even gaming to pass time and keep their sanity. Some people prefer using portable devices such as smartphones, tablets, and handheld consoles, but some people including myself also prefer a more robust, dependable, and powerful PC. However, not everyone can afford such a top-of-the-line PC Master Race Rig right? And that’s where the 10th Gen Intel Core i5-10400 processor comes in. It’s a relatively affordable processor that still packs a decent punch to it for productivity, media consumption and gaming without necessarily have to break the bank. And for those who are just looking for something more capable for online learning and work from home applications, it also features a decent integrated graphics. With that said, I just want to share with you a recent PC build that I did around this processor alongside another relatively affordable and new graphics card, the RTX 3060Ti.

In this article, we’ll focus on the performance of the 10th Gen Intel Core i5-10400 processor alongside all the components used for productivity and gaming, most especially on the highly anticipated futuristic Cyberpunk 2077 game. Can the Intel Core i5-10400 and RTX 3060Ti handle it? Let’s find out! Before we dive into the performance benchmarks of the PC Build, let me share with you a quick unboxing video of all the components used for this build so that you can have a better understanding of what we have to work with.

Here’s my current methodology for testing PC Builds, and I believe it is important for me to share this information with you so that you can have an idea of how I came up with these results.

For our benchmarks, I made sure the following were observed:

Let’s cut to the chase

I’ll share a more in-depth video later this week for the build montage and build experience but for the purpose of this article, let’s get straight to the performance benchmarks. 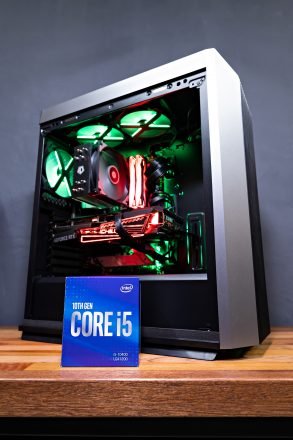 Let’s get the synthetic benchmarks out of the way real quick so that we can focus more on the real-world scenarios. Note: For some reasons, CUDA won’t run on our GeekBench 5 GPU test for the iChill RTX 3060Ti Now, synthetic benchmarks are good and all but nothing beats real-world performance testing, so let’s get into it.

As you can see, our Intel Core i5-10400 PC Build can certainly get the job done even for 4K video editing and exporting. Granted it’s not the fastest export time but for what it’s worth, it’s pretty decent. It’s just around 10 minutes slower than my miniITX build and if your application or use case scenario only requires 1080p or 1440p resolution, then it should be more than sufficient. Now, let’s go ahead and check out how our Intel Core i5-10400 PC build performs in gaming. I’ll give you more in-depth test results in Cyberpunk 2077 later but before that, let’s check out how it performs in some of the most popular FPS games. I’m all about FPS games so that’s what we are focusing on for this build.

In Valorant, which is a relatively easy game to drive, our Intel Core i5-10400 PC Build can easily handle it even at 4K resolution at balls to the walls settings. Of course, no one plays a competitive FPS game in max settings so it is safe to say, that it can push even more frames than this. With this, you can pretty much take advantage of high refresh rate monitors up to 4K 200Hz. The same scenario can be said in CSGO, even at 4K and in very high settings, our Intel Core i5-10400 Build pushes more than 200 frames per second. And if you play at 1440p, which In my opinion is the ideal resolution for a balance between image quality and performance, you can pretty much grab the latest 300hz monitor out in the market. At this point, as we take a look at the performance of our Intel Core i5-10400 build in Rainbow Six Siege, it is safe to say that the combination of the Intel Core i5-10400 Build and the iChill RTX 3060Ti is substantial enough even up to 4K resolution for most competitive FPS titles. Granted, these FPS titles are relatively easy to run compared to AAA titles but nevertheless, it’s nice to know that 4K gaming is already within reach even on some relatively affordable components compared to years before. The only FPS game on our list that pushed our Intel Core i5-10400 build to its limit at 4K resolution is APEX Legends. You can still play at 4K resolution on this but on lower frames per second. 81.67 FPS is still pretty good in my opinion and if you dial the settings down, you can certainly play at 4K using our build. Right off the bat, we can definitely observe that Cyberpunk 2077 is merciless when it comes to pushing your PC to its limits. Even at only 1080p resolution, we’re getting around 85 FPS which is a far cry from what we got from our FPS games earlier. However, do note that this is in ultra settings which is what I will personally set this to, to enjoy all the visual goodness of this game. 85 FPS is in my opinion pretty decent and still a relatively smooth gaming experience. Turning on DLSS or Deep Learning Super Sampling allows us to enable Ray Tracing while still getting relatively good frames per second. In my opinion, the DLSS Quality setting gives a good balance between good image quality and decent performance. As you can see, without the aid of DLSS, the FPS dropped down significantly to 60 FPS. Granted, it still highly playable at 60 FPS but giving up a bit of image quality of native rendering for DLSS to gain 20 FPS more is in my opinion, a more reasonable option. Bumping the resolution up a bit to 1440p, we’re getting just below 60 FPS without Ray Tracing and DLSS. It is still playable but without the visual fidelity of Ray Tracing. Turning on Ray Tracing at medium setting with the help of DLSS at Quality preset makes the gaming experience a whole lot better in terms of again the balance between image quality and performance. 55 FPS with Ray Tracing on is pretty good. In my opinion, 1440p with medium Ray Tracing and quality DLSS is the sweet spot for our Intel Core i5-10400 Build if you really want to push using Ray Tracing. Unless you want to go a bit higher in terms of frames per second, then you’ll have to tweak the settings down a bit more. With Ray Tracing enabled but without DLSS, the gaming experience is almost non-tolerable. 35FPS is something you wouldn’t want especially in an open world environment like this. Looking at our frames per second at 4K resolution even without Ray Tracing, it is safe to say that 4K gaming in Cyberpunk 2077 is too much for our Intel Core i5-10400 build to handle. 29 FPS is already close to a cinematic feel which is far off from what you should experience in fast-paced gaming. Turning on RTX at medium settings and even with DLSS Quality preset on, doesn’t change anything when it comes to our frames per second, we’re still getting 30 FPS. Lastly, forget about 4K at native rendering. Or better, forget about 4K gaming at all in Cyberpunk 2077 for our Intel Core i5-10400 build. It’s just simply too much for it to handle. With that being said, as I’ve pointed out earlier, 1440p resolution with medium Ray Tracing and quality DLSS settings is the way to go for our build as it yields a decent 55 FPS with a good balance in terms of visual quality and performance. Here’s a quick graph to summarize all of our Cyberpunk 2077 benchmarks. In terms of thermal performance, thanks to the good airflow of the Deepcool CL500 chassis partnered with the Deepcool MF120GT Case fans and the Tecware SE-224-XT CPU Cooler, our Intel Core i5-10400 sits comfortably cool on all our tests with an idle temperature of only around 29 to 32 degrees, an average load of around 33 to 52 degrees and maximum temperature when it spikes around 44 to 59 degrees. Even the most tasking application like video exporting in Adobe Premiere Pro 2020, it only got up to 59 degrees which is awesome. Our iChill RTX 3060Ti is also quite cool maxing out at only around 66 degrees in Cyberpunk 2077 with an average temperature of around 35 to 58 degrees throughout all our testings. As a whole, our Intel Core i5-10400 PC Build draws around 61.33 watts on idle and draws only around 315.33 watts during load in Cyberpunk 2077. This is way below our 850 watts power supply which gives us a ton of headroom for potential upgrades down the path. To conclude, our Intel Core i5-10400 PC build proved that you don’t necessarily have to break the bank to enjoy PC gaming at a decent resolution and refresh rate. It was able to handle Cyberpunk 2077 with Ray Tracing at 1440p resolution with decent frame rates. It is a testament that you can pretty much play any recent AAA titles using this relatively budget build and playing eSports titles should be a piece of cake. It can also handle 4K video editing and exporting, photo editing in photoshop, lightroom, and pretty much any mainstream productivity application. The build also has good thermal performance thanks to the combination of the Deepcool CL500’s mesh top and front panel for good airflow, decent RPM and CFM ratings of the Deepcool MF120GT case fans, and the performance of the Tecware SE-224-XT CPU Cooler. I also like the arsenal of the ASRock B460 Steel Legend motherboard with enough fan headers, RGB headers, and a ton of useful features both in hardware form and software. The iChill RTX 3060Ti also proved capable on all our tests including the Cyberpunk 2077 up to 1440p resolution. Overall, I think our Intel Core i5-10400 PC Build turned out pretty good and is suitable for those who are looking to build a budget PC for productivity, media consumption, online learning, graphics work, and gaming on the side.