As you all know, the latest 11th Gen Intel Core Processors were recently announced. With everyone discussing the performances of these new CPUs, we’d like to offer our expertise to inexperienced buyers.

Now that you’ve newly acquired the 11th Gen Intel Core Processors, chances are you need a motherboard and a cooler as well. Two frequent issues that we already know about regarding these advanced CPUs are their power consumption and thermal challenges.

How should ordinary gamers choose the most suitable hardware configuration? Some people may recommend you to pick the best, but the price is not cheap. So what should you choose? If you want to stream, edit videos, or play online games, we recommend you to use Intel Core i7-11700K + MSI MPG Z590 GAMING CARBON WIFI + MSI MPG CORELIQUID K360.

The MPG Z590 GAMING CARBON WIFI is a capable motherboard that can sustain the power requirements of the latest 11th Gen Intel Core Processors. With a total of 16 Duet Rail Power System, this motherboard has a strong and powerful VRM. It also includes MSI’s proprietary Core Boost technology, which allows for quicker and undistorted current delivery to the CPU. This motherboard is equipped with the latest WIFI 6E and Intel 2.5 LAN, which can provide high-speed internet, allowing you to upload videos or play online games more smoothly. At the same time, it is equipped with three sets of M.2 SSD slots, one of which supports PCI-E 4.0 SSD.

To perfectly utilize the powerful performance of Intel Core i7-11700K, in addition to the VRM design of the motherboard, the CPU cooler is also one of the key factors. What sets the MPG CORELIQUID K360 apart from other liquid coolers is its cooling performance. The MPG CORELIQUID K360 utilizes MSI’s exclusive TORX FAN 4.0 on the radiator, which can generate powerful airflow to the radiator for rapid cooling. The water block also features a 60mm TORX FAN 3.0. The TORX FAN 3.0 is used to provide concentrated cooling to the CPU, providing cooling to the M.2 SSD, VRM, and surrounding components for improved temperature. 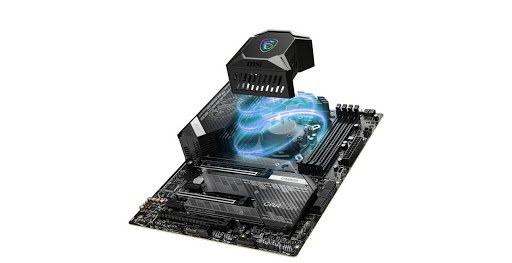 For this guide, both the MPG Z590 GAMING CARBON WIFI and MPG CORELIQUID K360 are used in the test. We will test its performance against the Intel Core i7-11700K to see whether or not the MPG CORELIQUID K360 is capable of providing enough cooling performance. We used Cinebench and AIDA64 to test the CPU heat dissipation performance, VRM, and M.2 SSD temperature.

With Cinebench R20, we found out that the CPU can maintain 75~77 degree Celsius under different liquid cooler fan modes with a 4.6GHz core clock. The CPU temperature is lowest at Gaming Mode and highest at Silent Mode as expected. ON top of that, the Core i7-11700K CPU can even be pushed to 5.0GHz with overclocking.

The MPG CORELIQUID K360’s water block has a built-in TORX FAN 3.0 that can help with the heat dissipation of the VRM and M.2. We believe that the MPG CORELIQUID K360 is sufficient in providing cooling to key areas. To prove this, we decided to look at the VRM and M.2’s temperature when the system is tested with AIDA 64. We look at the temperature of the VRM, which is lowest at 57 degrees Celsius when the fan is turned on. Compared to 74 degrees Celsius when the fan is turned off, the temperature is reduced by 23%. 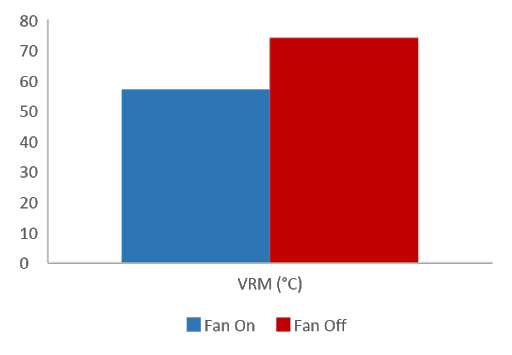 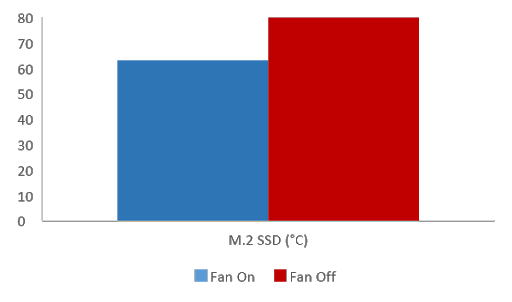 Test results prove that MPG CORELIQUID K360 with TORX FAN 3.0 in the water block can effectively reduce the temperature of VRM and M.2 SSD, and maintain the stability and overclocking performance of the CPU and storage during operation.

From the test results, we can easily see that thanks to the combination of MPG Z590 GAMING CARBON WIFI and MPG CORELIQUID K360 can provide users great performance at an affordable cost for daily use, gaming or streaming. The CPU performance can be unleashed with minimal thermal issues.