Power and aesthetics have always been a struggle for gaming peripheral manufacturers as most good-looking gaming mice lack in the power department, and vice versa. This is where Bloody’s P81 LIGHT STRIKE 5K RGB ANIMATION GAMING MOUSE come into play, giving gamers the best of both worlds. 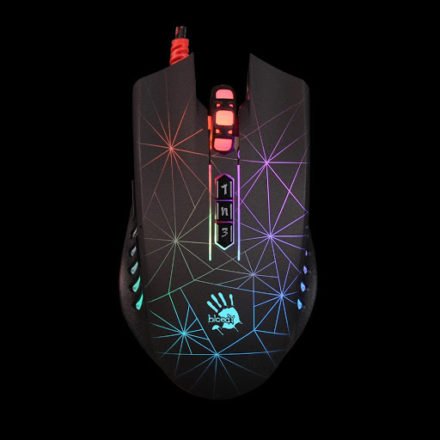 Right of the bat, P81 packs a punch in the aesthetic department with its Bloody RGB Animation. Unlike the conventional lighting of gaming mice, P81’s lighting effects are programmable individually with a staggering 16.8 million color options.

This insane amount of options opens up a world of extreme personalization possibilities and will grant gamers all the freedom they need to set them apart and stand out among their peers by choosing the perfect color that matches their personalities.

Overwhelmed by the sheer number of possibilities? Gamers need not fret as P81 also have 5 default preloaded RGB lighting effects that they can use while they are still deciding on the perfect color for them.

Like its aesthetic department, P81 also packs some serious firepower in the power department. Coming from the Light Strike family of Bloody, P81 gives gamers lightning speed clicks with its Infrared-Micro-Switch to react at light speed with extreme 0.2ms click response which can never be surpassed by conventional gaming mice.

P81 also possesses an incredible precision and accuracy, sporting a maximum speed of 5000 CPI which is twice as high as other gaming mice in the market. This means that every target won’t be missed with P81. P81’s speed is also adjustable to meet the demands of specific games, with 100 CPI being its lowest to its peak of 5000 CPI, P81 gives you just the right precision for every game.

Minor errors like double clicking will also be a thing of the past once gamers play with P81. Its Light Strike technology makes its output zero-bouncing which will save them the hassle in most intense moments of the game, giving gamers every single precious millisecond that could’ve been wasted due to double clicking.

But the most epic features that the P81 has on its sleeves are its 3 shooting modes and 6 sniper modes.
These shooting modes are given dedicated nodes in the left button that will give you a tremendous boost in shooting capability, helping you last longer in battle and get that chicken dinner. The sniper modes are also included in P81, intended to give gamers an unfair advantage even in long range settings.

Beauty and power. Mostly at their opposite ends contrasting one another but with P81, ganers can have them both literally and figuratively at their hands, making one a force to be reckoned with.

The P81 retails at around P1,200 SRP and is available through leading online and PC stores nationwide.